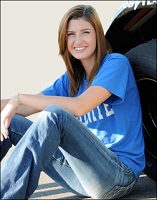 A lot of television shows, magazines, etc., like to do “Where Are They Now” features every now and then, and AutoRacingDaily.com is no different. Remember a review I wrote a couple or so years ago about a PBS special called “Racing Dreams?” To refresh your memory, it followed three preteen kids competing in the go-kart ranks, hoping to race in NASCAR one of these days. Footage for the documentary was actually filmed in 2007. Well, this is going to be a “Where Are They Know” on one of those kids — Annabeth Barnes.

Honestly, I have to say that I hadn’t given a lot of thought to any of these three kids after watching a special preview DVD I received from PBS and then blogging about it here, but Barnes’ name rang a bell when I saw the list of drivers chosen to participate in NASCAR’s Drive for Diversity program for 2013. It looks like at least Barnes is well on her way to realizing those dreams she spoke of on the PBS special.

In case you’re not familiar with the Drive for Diversity program, it’s an idea NASCAR came up with several years ago to get more minorities and women behind the wheel in NASCAR competiton. It’s a yearly program that puts such drivers behind the wheel of Rev Racing entries at the local level and even in K&N Series regional NASCAR events. Current NASCAR Sprint Cup Series driver Aric Almirola was one of the first Drive for Diversity drivers. He started the program with a development deal at Joe Gibbs Racing. A more recent Drive 4 Diversity alum is Darrell Wallace Jr., who raced part-time at the Nationwide level for Joe Gibbs Racing in 2012.

Anyway, back to Barnes. Barnes was the ripe old age of 11 back when footage was shot for “Racing Dreams.” She went on to race an additional year with the World Karting Association before moving on to stock cars. After that move, she became the subject of another show, this time as the main focus of the Great American Country (GAC) original series, “Born to Race.” The show followed her career to Hickory (N.C.) Motor Speedway when she was 16-years-old.

This year isn’y Barnes’ first to be associated with the Drive for Diversity program. She was actually selected for the program back in 2008, according to a racing timeline on her site, annabethbarnes.com. She began racing Bandolero cars the following year in 2009 and then competed in her first late model race in 2010.  Barnes ran five limited late model stock races that year, posting four top-10 finishes. She ran late models full-time in 2011 and claimed her first late model stock win.

In her Drive for Diversity efforts with Rev Racing in 2013, Barnes will be competing in the NASCAR Whelen All-American Series.