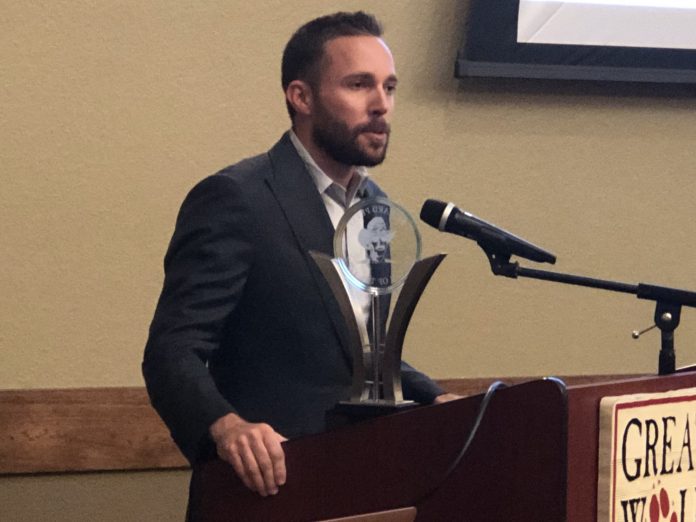 Ross Chastain was honored as the 2022 Richard Petty Driver of the Year by the National Motorsports Press Association on Sunday.

Chastain had the best season of his NASCAR Cup Series career last season as driver of the No. 1 Trackhouse Racing Chevrolet. He claimed his first two-career wins at Circuit of the Americas in Austin, Texas, and Talladega (Ala.) Superspeedway to make the series playoffs. Then, with a spectacular move of using the wall on the final lap at Martinsville (Va.) Speedway to finish fourth in the penultimate race of the season to beat Denny Hamlin for the final slot in the championship four of the playoffs.

“Played a lot of NASCAR 05 on the Gamecube with (brother) Chad growing up, and you can get away with it,” Chastain said. “And I never knew if it would actually work. I did that when I was 8 years old.”

Chastain finished third in the season-finale at Phoenix Raceway to finish third in the 2022 driver standings.

Recently retired Cup Series driver Kurt Busch also was recognized by the NMPA on Sunday with the presentation of the Pocono Spirit Award. He claimed the, overall, award for the year after claiming the quarterly award twice in the first and fourth quarters of the year.

Busch was recognized for his “Window of Hope” program and the example he set for his fellow competitors in being open and honest in his struggles from suffering a concussion in a qualifying crash at Pocono Raceway in Long Pond, Pa., last July.

Busch’s “Window of Hope” was in its second year in 2022. The program includes Cup drivers racing with pink window nets on their cars during the Charlotte (N.C.) Motor Speedway Roval race in October. Those window nets are, then, auctioned and proceeds given to the Atrium Health Levine Cancer Institute’s Project PINK.

Busch was sidelined for the remainder of the 2022 season after his crash and announced his retirement from full-time competition near the end of the season. He remains with 23XI Racing in a driver advisor-type role and hopes to run a partial schedule of races in 2023, but he has yet to be medically cleared.

“I will get back to 100 percent, I promise,” Busch said last October. “If I’m cleared, maybe you’ll see me at a few select races (next season).”

Gear up for the 2023 NASCAR season with swag from Fanatics.

How much do NASCAR cars cost?

How much do NASCAR cars cost?