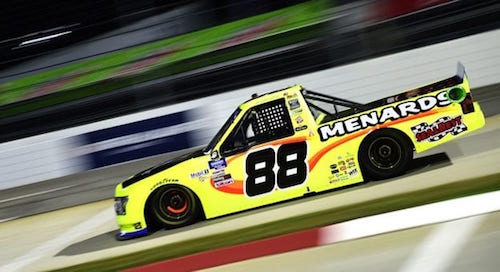 Toyota confirmed Thursday morning the return of ThorSport Racing to the manufacturer’s fold for the 2021 NASCAR Camping World Truck Series season. The return to Toyota was speculated when ThorSport announced last month it had left Ford.

“We’re all looking forward to kicking off the 2021 NASCAR Camping World Truck Series season as we welcome ThorSport Racing back to the Toyota Racing family. This is a great team with an impressive line-up of drivers. Our previous relationship yielded success in the form of race wins and two driver championships for Matt Crafton. We’re looking forward to working with the team again and adding to our accolades together as we focus in on contending for Toyota’s 12th Truck Series manufacturer’s title.”

ThorSport Racing left Toyota for Ford ahead of the 2018 season. The multi-truck team fielded Toyotas between 20012 and 2017 after a switch from Chevrolet. During the team’s previous stint with Toyota, ThorSport driver Crafton won back-to-back championships in 2013 and 2014. He also was Truck Series champion in 2019 while with Ford.

ThorSport will continue to field four trucks in 2021, with Crafton returning to the seat of the No. 88, Johnny Sauter to the No. 13 and Ben Rhodes to the No. 99. Grant Enfinger and Christian Eckes will share the No. 98 that Enfinger drove full-time in 2020.