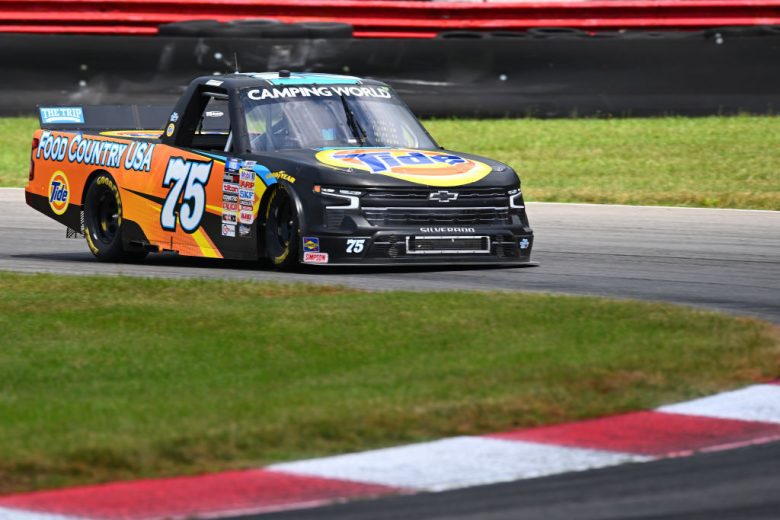 Parker Kligerman dominated the O’Reilly Auto Parts 150, the debut NASCAR Camping World Truck Series race at Mid-Ohio Sports Car Course in Lexington, Ohio, on Saturday on his way to his third-career Truck Series win, his first since 2017. The win also was a second-career win for Henderson Motorsports.

“It’s unbelievable when you put a talented group of humans together what they can achieve,” Kligerman said. “We were doing this on an absolute fraction of what the two trucks we were up against, and we won at Mid-Ohio, a road course. Finally, a road course win. I started in road courses. I came into NASCAR thinking, ‘Oh, that will be easy.’ It’s taken me more than a decade to get a win, but finally, we’re here.”

Kligerman led 56 laps of the 67-lap race and claimed the third and final $50,000 bonus of the 2022 edition of the Triple Truck Challenge.

Zane Smith finished second after running second to Kligerman for much of the race and closely challenging Kligerman for the win in the final three-lap, green-flag run to the checkered flag. Smith took a final lead from Kligerman on a lap-60 restart. But on the final restart on lap 65, Kligerman retook the lead.

“It was gonna be hard for me to wreck the guy who pushed me to my Daytona win,” Smith said.

Kligerman won the first 20-lap stage after starting on the front row and taking the lead from pole sitter Corey Heim on lap four. Heim ran second to Kligerman most of the remainder of the opening stage before dropping to fourth on a single-lap, green-flag run to finish the stage, losing positions to Smith and John Hunter Nemechek.

Kligerman, then, dominated the second stage, fending off challenges from Smith until the final lap of the stage when Smith took the lead to win stage two at lap 40.

Drivers including Nemecheck and reigning Truck Series champion Ben Rhodes struggled in the second stage. Rhodes spent a significsnt amount of time on pit road for electrical and fuel cell work on lap 29 before eventually running off-course. Nemechek, then, drove a smoking truck to the garage on lap 34.

Nemechek’s Kyle Busch Motorsports teammate Heim also reported to the garage with a transmission problem in the final 10 laps of the race.

When the race restarted for the final stage on lap 42, Kligerman retook the lead from Smith.